St. Ives Deep Restoring Body Lotion. What we consume is what we are...

The first product I decided to start with was one that I used everyday.  I would apply it at night time and  then snuggle up against my hubby.  The reason I started this blog was because I was so tired of seeing parabens in everything.  The cream I bought and used regularly didn't have any parabens in it, I was sure of that when I bought it.  However, to be perfectly honest, I really didn't know what the other stuff listed on the bottle actually was.  How can I be so concerned and anti-paraben and accept blindly that the other ingredients weren't actually harmful as well?  Thus began my quest.  Awareness of the products we consume is something that we should all be striving for, because honestly, it seems like the big companies sure don't care. 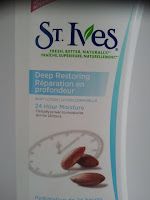 Water: is water and pretty self explanatory

Glycerin: is pretty benign and of low toxicity.  It is used in products mainly because it is affective at improving the smoothness of the product and is a good lubricant.  Glycerin is a byproduct of bio-diesel.  However, all you vegans take note.  This form is very expensive, therefore it is more often derived from animal fats such as beef and vegetable oils such as coconut or soy beans.  Therefore some products that list glycerin in their ingredients may not be vegan.

Caprylic/Capric Triglyceride: is generally derived from coconut oil.  When used in skin care products it helps to moisturize dry skin.  It also reduces protein loss when used in hair care products such as shampoo/conditioner.  Its general purpose is to improve the feel and spreadability of creams.  It is also a suitable carrier for oil infusions among other things.  Although coconut oil has been deemed dangerous due to high levels of saturated fats and lauric acid which causes high blood pressure, it does not have the same reputation in personal care products.  It has been regarded as safe, even for pregnant woman to use.  However, there is a small population of people who still have reactions to this ingredient.  One worthy thing to note is this, it can be used as a personal lubricant, however it may cause damage to latex condoms.  An interesting piece of information.

Cetearyl Alcohol: Is considered a fatty alcohol.  It is used as a foam boosting surfactant and an emulsion stabilizer.  In my research I found little information on its toxicity to either the environment or to humans.  Although I did find some blogs discussing it and they seemed to think it was pretty benign to  the environment.

Mineral Oil (Paraffinum Liquidium): Found in most baby care products, creams and make-ups.  It is a by-product from the distillation of petroleum to produce gasoline.  It is considered a carcinogen by the World Health Organization but deemed safe by the American FDA.  It has been known to cause skin cancer in small rodents.  Please be aware of this ingredient.

Stearic Acid: Another really nasty ingredient. It is a saturated fatty acid found in both animals and vegetables.  It is considered safe when used in amounts below certain levels.  If slight to higher doses are used it has been shown to cause cancer, neurotoxicity, organ toxicity, and effects to the nervous system, respiratory system,  as well as skin irratation.

Cetyl Alcohol: Here is an interesting fact the name cetyl is derived from whale oil which was the original source of cetyl.  Now it is derived from petroleum or vegetable oils such as coconut.  It is used in personal care products as a thickening agent or in shampoos as an emulsifier.  In my research, there seemed to be very little information on the toxicity of cetyl alcohol, on either the environment, animals or humans.  The only information I found was the evidence of skin irrations and minor allergies causing rashes.  Most information seemed to deem cetyl alcohol safe to use and practically non toxic.

Urea:  is commonly found in the urine of mammals.  Vegans beware!  However it is also reproduced synthetically for the use in fertilizers, adhesives, plastics, explosives, abortions (yes I said abortions) cigarettes, and skin care products.  That is only the beginning of the list of things Urea is good for.   Now, I know when you read this and you see the word abortions, skin care and cigarettes you think well this stuff can't really be all that good for me (inject mild amount of sarcasm). Well you are correct.  It is know to be very irritating to eyes, skin and the respirtatory track. When used in fertilizer it can cause dermatis which I found highly ironic since it is found in skin care products. when heated can cause toxic gases and when mixed with certain other ingredients can cause violent explosions.  It has also been shown to create algae blooms when used in fertilizers..... Just what I want to put on my face.

Butyrospermum Parkii (Shea) Butter: Now this is a neat product.  Shea butter is derived fro the seeds of the African Shea Tree.  It acts as thickening agent as well as a skin conditioner.  This product is preferred because it does not turn into a soap as other fatty oils do.  It is considered a natural moisturizing factor because of its close resemblance to the lipid content of human skin.  It helps to regenerate skin, block out bacteria and naturally absorbs UVB rays to protect the skin from the sun. It is  safe to use and considered non toxic.  However do to the fact that it is a nut people with nut allergies need to beware.

Prunus Amygdaluspulcis dulcis (Sweet Almond)Oil:  Is derived from, yup you guessed it, Almonds.   This product is rich in oils and fats as well as many vitamins.  It is considered safe and non toxic.  However, buyer beware, this may not be the product for you if you suffer from nut allergies.

Dimethicone: also known as polydimethylsiloxane (PDMS) which is a silicone oil.  It is used in shampoos to lubricate hair and make it easier to comb and adds shine.  In creams it acts as a skin protectant and an emulsifier.  The FDA has deemed it safe to use.  However most people have heard of the horror stories with silicone breast implants leading companies to switch to saline filled implants.  Other side effects linked to PDMS include allergic reactions from mild to severe as well as a worsening in dryness.  Although the data is limited, it appears to also cause non-reproductive toxicity as well as links to environmental toxicity due to the toxins being bioaccummulative.  This means it builds up and builds up in our soils and sediments.

PEG 100 Sterate: Wow another awesome ingredient.  PEG 100 Sterate is created by combining natural oils with stearic acid.  It is used as an emulsifier and a moisturiser as well as a cleaning agent in shampoos.  Now this is where it becomes nasty.  Never use on broken skin as it has been shown to cause kidney toxicity when used in a antimicrobial cream.  It has also been liked to cancer of the breasts and uterine, leukemia and brain cancer due to impurities found in it such a ethylene oxide.  There are also warnings regarding reproductive toxicity, organ system toxicity and skin irrations.  My goodness what on earth are we doing to ourselves?

Cyclopentasiloxane: Is another silicone and is used in cosmetics as a conditioner.  I had a hard time finding out any information on this product.  It appears to be safe in the fact that it has not been detected in human urine or tissues.  Though if heated past point of decomposition it will release toxic gases.  However overall this product appears to be safe and relatively non toxic.  As I say that I am thinking in my head 'this ingredient may need some investigating.'

Triethanolamine: Is used in personal care products as mainly a surfacant and emulsifier and acts as a neutraliser of fatty acids or in other words a PH balancer.  This ingredient is again pretty toxic. It is a known skin irritant and has been linked to minor to severe allergic reactions.  In research it has been linked to tumour growths in the liver of female rodents, surprisingly not in male rodents.  It is also a known toxin to aquatic species.

Cabomer: is not actually one molecule but refers to polymers made from acrylic acid.  It is used in creams and beauty products as a thickening agent and controls the flow of the product.  This ingredient has been labelled as safe and has a low potential for skin irritations, allergic reactions, photo toxicity and sensitisation.

Cyclohexasiloxane: Is another silicone, and is used in cosmetics and beauty products as a skin conditioner and emollient as well as a skin protectent.  It has again been linked to environmental toxicity due to persistence and bioaccumulation.  Those poor animals just don't get a break from our obsession with beauty.  There have also been links to non-reproductive organ system toxicity.  Again I will remind everyone of the silicone breast implants disasters.  Beauty really is pain...or does it have to be?

Ethylhexylglycerin: Hmm interesting, this is a fairly new ingredient and is being used in replacement of parabens.  It is a natural preservative and surfacant and is derived from glycerin. It appears to have low levels of phototoxicity and has shown to have low levels of allergic reactions though there have been a few cases of skin irrations.  I was unable to find any useful information on any possible effects of Ethylhexylglycerin on the environment.

Disodium EDTA: is a poly amino carboxylic acid.  It is synthesised from ethylenediamine, formaldehyde, and sodium, and is used to dissolve limescale.  Yum, because we all have limescale build up on our faces.  It is used in cosmetics to improve its stability in air.  As the reputation implies Disodium EDTA is not a nice ingredient and should be baned.  It is considered a persistent organic pollutant.  It is known to cause negative reproductive and developmental effects.  It has been shown to be mutagenic as well.

Phenoxyethanol: Is another fairly new ingredient, it is a glycol either and is used as a bactericide.  It is generally considered safer then the traditional formaldehyde releasing agents, however the FDA has stated that it can depress the central nervous system which could cause vomiting, diarrhea and can cause dehydration in infants.  There have been concerns of this product being carcinogenic due to the ingredients it is derived from.

Fragrance (Perfume): odours to enhance the product to be appealing and pleasant smelling.  Generally considered safe and non toxic.  However some people do have sensitivities to fragrances and develop such symptoms as headaches or migraines.


So in conclusion, even though it may say 100% all natural, it doesn't necessarily mean that it is safe or healthy.  It is always important to read the labels and understand all that is implied.  After concluding this blog and all the research that was entailed I have come to the conclusion that I will not be buying this product again.  In the future I will be researching alternative products that are both safe and effective.  If anyone has any thoughts or suggestions please feel free to comment.

Email ThisBlogThis!Share to TwitterShare to FacebookShare to Pinterest
Labels: and conditioners, Shampoos, Soaps